Which Burns More Calories? Running on a Treadmill or Outdoors? 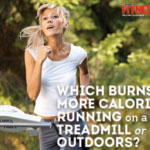 Technology is a wonderful thing. It helps us complete many of our tasks with greater ease and efficiency. Modern technology has had an impact on nearly every phase of our lives, including fitness and exercise. It wasn’t that long ago that if you wanted to get in a running workout, you had to lace up your shoes and head out the door. It didn’t matter if it was raining, snowing, or 110 degrees in the shade. If you were going to get your run in, you had to dress appropriately and brave the elements. Today we have high-quality, technically advanced treadmills that allow us to complete any running workout in the comfort of our home or gym. We no longer need to run in bitter cold or scorching-hot temperatures. There is no longer a need to endure a run in a driving rainstorm or raging blizzard.

Lack of wind resistance has the most effect on an important part of running: calorie burning. When exercising on a treadmill, you are, in effect, running in place. You are not moving your body against the air. When you run outside, the air creates resistance. Studies have estimated that outside air resistance creates an increase in your workload of between 2 percent and 10 percent, depending upon your running speed. The faster you run, the more of an effect the air resistance has on you. A study conducted some years ago determined that the energy cost of overcoming wind resistance was 7.8 percent when sprinting, 4 percent when running at fast, middle-distance paces and 2 percent when running at easy paces. Higher energy costs means you are burning more calories, so the lower energy costs associated with a lack of wind resistance will result in fewer calories burned.

Luckily, there is a very easy solution to this problem. Simply elevate your treadmill slightly to increase your energy costs. Your obvious question is how much should you elevate your treadmill to compensate for the lack of wind resistance? AM Jones and JH Doust at the Chelsea School Research Centre in Eastborne, United Kingdom answered that question. The researchers investigated the effect of various treadmill inclines and found that elevating your treadmill 1 percent will make the energy cost of treadmill running equal to running outside on a level surface. Running at zero percent elevation burns less calories and running at 2 percent or more elevation burns more calories than level, free-range running.

I’ve been coaching runners for more years than I’d care to admit. During all those years of coaching, I have seen many different types of running injuries from strains and sprains, to tendinitis and fractures. Among all those injuries, there is one type of injury that I see more than any other: medial tibial stress syndrome (MTSS) and stress fractures of the tibia. MTSS is the more accurate term to describe shin splints, which are an overuse injury to the muscles in your shin that stabilize your foot. A stress fracture is a micro fracture of your tibia that is usually caused by ignoring the symptoms of MTSS.

You may wonder what this has to do with calorie burning. It actually has a great effect on calorie burning, because recovery from MTSS can take from one to four weeks. Recovery from a stress fracture can take up to three months. You can’t run when you are recovering from these injuries. If you can’t run, you aren’t burning any calories. So, you obviously need to try to avoid these very common running injuries. How do you avoid them? Studies have shown that substituting treadmill running for outdoor running can help you avoid MTSS and stress fractures. You’ll be able to spend more of your time running and less time recovering from injuries.

This is great news for runners who want to ensure a consistent, injury-free running program that will maximize long-term calorie burn, but it isn’t without its drawbacks. I’m sure you’ve heard the axiom, “use it or lose it.” I believe that to be true more often than not, and I think it’s at least partially true in this case. While the lessened stress of treadmill running protects you from injuries, it also decreases the amount of tibial bone strengthening. That same stress that can cause injuries also helps build up the strength in your bones. So it is like a double-edged sword. The stress caused by outside running can hurt you, but it can also help you. The answer to this dilemma is to do some running both on the treadmill and outdoors. The treadmill running will reduce stress and protect you from injury, while the outdoor running builds up the strength and resilience in your tibial bones.

Running is like a battle between your will to keep going and the effect of fatigue insisting that you stop or slow down. When you’re running outside, you may lose that battle without even knowing it. When fatigue rears its ugly head, your brain and body begin to gang up against you and your will to continue. You physically feel the fatigue through minor pain and burning. That is your body signaling you that it would like to slow down. You’ve probably experienced that feeling many times, but your will is strong enough to keep your body going. The problem is that your brain and body begin to force you to slow down whether you want to or not. Your brain begins to decrease the signals to your muscles that allow them to contract. As a result, your pace begins to slow. You may not even know you’re slowing down because your effort level feels the same. Slower pace translates to fewer calories burned.

When you’re running outside, there’s very little you can do about that. Treadmill running is a different story. The treadmill belt moves at an unrelenting pace. Your body has only two choices. Keep on running at your planned pace, or jump off the treadmill. This speed consistency of treadmill running is a powerful tool for keeping your calorie-burning level high.

At first glance, it may appear that treadmill running burns fewer calories than outdoor running. If you compare a treadmill at zero percent elevation and running outdoors on a level surface, treadmill running does burn between 2 percent and 4 percent fewer calories. However, that difference is very easily overcome by simply elevating your treadmill 1 percent. When you take into account the increased calorie burning of pace consistency and injury prevention, the treadmill is equal or even superior to outdoor running in calorie-burning potential.

The Health Benefits of Open-Water Swimming

How To Uplevel Your Style For Women Over 50