Buckwheat: Health Benefits, Nutrition Facts, and How to Eat It 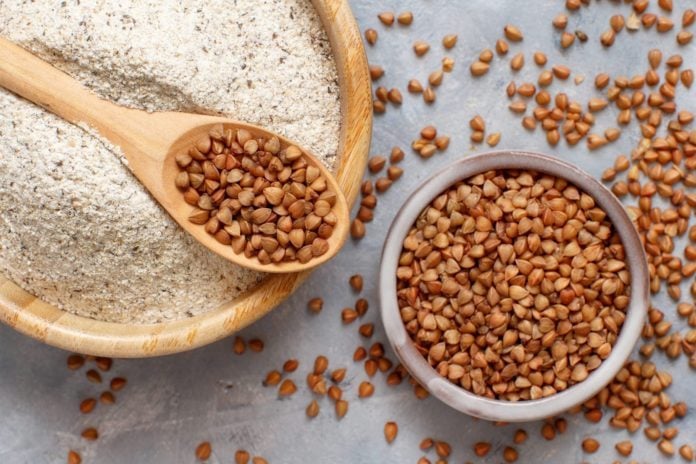 Here’s the scoop on the seed’s health benefits—plus creative and fun ways to add it to your meals.

Despite its deceiving name, buckwheat is neither wheat nor grain—it’s a seed. To make things more confusing, it’s classified as a pseudo-cereal and often referred to as a grain. But buckwheat is more similar to amaranth, millet, or quinoa, which are tasty and nutritious seeds that are full of fibre and are gluten-free but get clumped into the grain department.

Buckwheat is packed with nutrients and minerals, such as iron, copper, and magnesium, and it has plenty of fibre. Lisa Young, RDN, adjunct professor of nutrition at NYU, and nutritionist in private practice based in New York, says, “It contains good carbs, protein, fibre, and an array of vitamins and minerals including potassium and magnesium, thereby making it good for heart health.”

(Related: Should You Be Eating Flaxseeds? The Health Benefits, Risks, and Nutrition)

A serving size of buckwheat is around 1/2 cup to 3/4 cup. A 1/2 cup of buckwheat contains these nutritional benefits.

Where does buckwheat come from?

There are many different varieties of buckwheat and the two most well-known are Tartary buckwheat (Fagopyrum tartaricum) and common buckwheat (F. esculentum). Common buckwheat is related to the plant family of rhubarb and sorrel. It is endemic to western China, Tibet, and eastern India. It also grows well in the United States, Southeast Asia, Russia, and Central and Eastern European countries. Buckwheat grows quickly, can thrive in cold climates and high elevation areas, and is drought tolerant, making it an ideal crop to plant in many regions.

Seeds are typically referred to as raw buckwheat groats, which have a beige hue or light green color. Although there are different varieties, “nutritionally there are no differences between the two,” says Samantha Murdoch, a registered dietitian at Lenox Hill Hospital based in New York.

A gluten-free seed for those with celiac disease

Gluten is a type of protein that is found in many grains, such as barley and wheat. For people with celiac disease, eating gluten damages their small intestine, preventing the absorption of key nutrients and triggering symptoms such as diarrhea, bloating, and other discomforts. Buckwheat is also a great substitute for anyone who wants to reduce their gluten intake.

Buckwheat offers plenty of nutritious benefits. There’s a good reason why many doctors and nutritionists praise this seed. “A higher fibre diet, in general, can help prevent heart disease, diabetes, high cholesterol, and help aid in weight management. Incorporation of buckwheat in the diet is an excellent way to reduce chronic conditions as it is an essential component of a well-balanced diet,” says Murdoch.

Antioxidants are naturally occurring compounds that protect the body from harmful free radicals that can contribute to chronic diseases like heart troubles and even cancer. While many plant-based foods are rich in antioxidants, buckwheat is loaded with ones that may protect the heart, help lower blood pressure and cholesterol, and provide other health benefits. “It contains flavonols, rutin, and phenolic acids, that contain anti-inflammatory and anti-cancer properties,” Young says.

“Manganese is a very important antioxidant that contributes to many bodily functions such as metabolism of amino acids, cholesterol, glucose, and carbohydrates,” explains Murdoch.

Many of the antioxidants found in buckwheat are beneficial for the heart. “It not only has fibre, protein, vitamins, and minerals but also antioxidants called flavonoids, which are great for heart health,” says Davis. One such flavonoid, quercetin, may help reduce blood pressure, suggests a study published in 2012 in Advances in Nutrition.

Another notable component of buckwheat is D-chiro-inositol, a vitamin-like substance that seems to help lower blood pressure and help balance sugar levels in the blood. Buckwheat has a higher concentration of this compound than any other food.

The high fibre content in buckwheat helps to reduce cholesterol because it essentially helps clean your digestive tract. Murdoch explains, “Fibre acts as a scrub brush in your GI tract in which it blocks the absorption of cholesterol and other fats. Incorporation of high fibre foods into your diet, such as buckwheat or other whole grains can help reduce the risk of cardiovascular disease, aid in weight management, and lower cholesterol.”

A healthy choice for people with diabetes

Buckwheat has a low glycemic index, meaning the food takes longer to digest and absorb, and that helps prevent harmful spikes in blood sugar levels. Low glycemic foods are helpful for people with diabetes because there isn’t a sudden increase in their blood sugar. Young says, “It has a fairly low glycemic index and is high in fibre making it a good food for diabetics to include, as well as a food to add for diabetes prevention.”

The mineral magnesium is also beneficial in aiding type 2 diabetes. “Research has also linked type 2 diabetes and magnesium because of its important role in glucose control and insulin metabolism,” says Murdoch

Foods rich in fibre can help with maintaining blood sugar levels. “It’s a good source of fibre, which means it’s good for heart health. High fibre foods help slow the absorption of other starches in the food—leading to a more steady, healthy rise in blood sugar,” explains Davis.

(Related: 5 Budget-Friendly Vegetables That Are a Great Source of Fibre)

Some people may be allergic

Eating buckwheat is safe for most people—though some may have an allergy to the seed. Allergies to buckwheat are rare, but be wary of reactions such as hives and swelling, says Young.

How to eat buckwheat

You can prepare buckwheat as you would rice or quinoa, or eat it as a breakfast porridge. “People should definitely branch out and try adding this seed to their diet,” Murdoch says. Buckwheat flour is used to make soba noodles, typical in Japanese cuisine, and to make crepes. “You can even grind the grain, and make it into flour to use in pancakes,” says Murdoch.

Toasted buckwheat has a mahogany hue and a nuttier aroma than buckwheat groats and is often referred to in the United States as kasha. Toasted buckwheat is often eaten as a substitute for granola or as a crunchy and nutritious topping on salads. Note that the name kasha can refer to several types of boiled toasted grains in Russia and Ukraine, including buckwheat.

Ideas and inspiration for preparing buckwheat

“Buckwheat can also be added to stir-fries or serve as a side dish. It pairs really well with salmon and broccoli,” says Young. “To make it, mix the buckwheat with egg, then fry them over a medium heat (with onions optional) for a few minutes, and then add hot water mixture to the frying pan for them to finish cooking,” explains Young. “Try using as a base under your favorite protein with a side of roasted vegetables of choice.” Another option: “Instead of croutons, add cooked buckwheat to your salad of choice for an extra nutrient punch,” suggests Murdoch.

Next: 5 Types of Rice: Which Is the Healthiest?

A Guide to Back Pain Symptoms, Treatment, and Prevention

8 Newsletters, Written by Women, That You’ll Want in Your Inbox

How long does mk 2866 take to work, can sarms be detected