Want Better Posture and a Shapely Back?

Taking ownership of good posture is not something that just happens. Whether you sit at a computer, stand at a cash register, or you’re picking up toys, the chores of daily life will tend to pull your shoulders forward and round your upper back. Of course, you could settle for a weak and drooping upper back, but this would make your shoulders sag and curl forward, which could appear to put more than 20 years on your real age. Aging occurs early enough without accentuating such stereotypic posture. And there is no good reason for poor posture to occur in an active person, except for intentional neglect. On the other hand, if you’re interested in expending some energy to improve your posture, you’ll look great and feel even better. Furthermore, good posture can improve the way your confidence is projected to others, even when doing something as simple as walking into a room.

Like anything else that takes work, the effort expended to strengthen the muscles around the shoulders, back and scapula (shoulder blade) will pay off and the dividends are found in superb postural benefits. The lat bar pulldown is an excellent way to stress most of these muscles and to strengthen the upper pillars of your postural musculature.

Trapezius. The largest muscle associated with the scapula bone is the trapezius muscle. It’s a large, flat, triangular muscle that covers the posterior aspect of the neck and the superior half of the back. It begins at the base of the skull and extends from the seventh cervical (neck) vertebrae to the last (12th) thoracic vertebrae in the back. It attaches to the lateral part of the clavicle (collarbone) and along the medial border of the scapula. This arrangement forms a unique diamond-shaped muscle. Each of the three general regions of the trapezius muscle has different functions. The middle and lower parts of the trapezius are activated most strongly in the lat pulldown. The middle parts of the trapezius pull the scapula toward the vertebral column (like squeezing the scapula together) in a movement that’s called scapular adduction. This is an important component of the lowest part of lat pulldowns. The inferior (lower) parts of the trapezius help to lower (depress the scapula) and this function also acts to help pull the lat bar downward in the exercise. The medial part of the trapezius is particularly important for keeping the shoulders back (squeezing your scapula together) and maintaining excellent upper body posture.

The lat pulldown invokes extension of the humerus at the shoulder and flexion of the elbow. This extension of the humerus (pulling the humerus bone down and posteriorly) activates the latissimus dorsi and the teres major, the scapular muscles. Although the back muscles have been emphasized here, many other muscles are activated by lat pulldowns. This includes part of the pectoralis and deltoid muscles and because the elbows must flex as the bar is pulled downward, even the biceps brachii and forearm muscles are activated.

1. Sit in the seat of the lat pulldown unit and position your thigh bar across the anterior part of the middle regions of both thighs. The pad should fit snugly on your thighs.

2. Take a shoulder-width grip with a pronated grip (palms facing away from your body). This will tend to de-emphasize the biceps brachii as compared to a very narrow grip with the palms facing you.

3. Pull the lat bar down to the top of your chest and make sure your head is positioned posteriorly enough to avoid a collision of your chin with the bar. As the bar is approaching your chest, slightly arch your upper back as you attempt to draw your elbows back as far as possible.

4. Hold the bar at chest level for a count of two.

5. Slowly return the bar to the starting position, but do not let the weight stack touch the remaining stack. In this position, try to stretch your entire upper back musculature under the resistance of the weight stack. Keep the stretch on the muscles of the upper back for a count of two.

6. Immediately move into the next pull downward and continue this sequence until your set is complete. 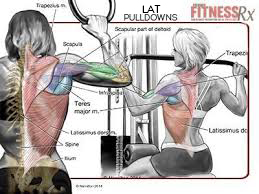 The orientation of the muscle fibers of the teres major is such that a wide grip on the lat bar will provide a direct line of pull and an optimal stretch. This may more fully activate the teres major muscle, which will result in greater width, especially high in the axilla at the back-arm tie-in. However, if you are not particularly interested in adding some muscle width to your back in this region, keep your hands at a shoulder-width grip and no wider. All the muscles described here are stretched when your arms are at the top position, so it’s important to hold this stretch for a few seconds before beginning the contraction. Under no circumstances should you allow the weight to “jerk” your shoulders upward at the end of each repetition; otherwise you may overstretch the rotator cuff muscle group and destabilize your shoulder structures.

Furthermore, jerking into the stretch with a large or ballistic pull will almost certainly injure the attachment sites of these muscles and/or induce tendinitis-like symptoms. It might not happen immediately, but it will almost certainly happen. Rather, you should control the upward movement in the lat pulldown, so it’s slow and controlled. You should then hold the stretched position before moving to the next repetition.

The lat pulldown will not do much for the lower back and the area that lies directly along the spine, but it will activate and strengthen your postural muscles on the middle and upper back. Although your mother may not have had lat pulldowns in mind when she told you as a child to put your shoulders back and to straighten your posture, that is probably because she didn’t know the benefits of this great exercise. In addition to better posture, lat bar pulldowns will create a firm back you will want to show off. A few months of dedicated work will unwrap a posture-perfect back that will allow you to stand tall and command attention.

The post Want Better Posture and a Shapely Back? first appeared on FitnessRX for Women.

15 Winter Meals to Enjoy on Cozy Nights In

Buttery, Salty and Flaky, These Cheddar Biscuits Are Everything You Could Want in a…

Trending things about women's health and beauty| Go to https://www.summer-n-sand.com/