The warm weather’s here and so are those sultry sleeveless fashions. Strapless dresses, sports bras … the offerings are seemingly endless. But in order to look your best in these outfits, your upper body has to be up to the task. This is where the “Look Great Sleeveless” body sculpting routine comes in. By following the program as outlined, you’ll tone up your chest, shoulders and arms, developing an upper body that looks great regardless of what you wear! Sound enticing?

When creating a routine, most trainees make the mistake of randomly stringing together a few exercises, neglecting to consider how these movements interact with one another. The net effect is a hodgepodge of maneuvers with little cohesion. Needless to say, this isn’t the way to get a terrific upper body. Ultimately, if you want to rise above the ordinary and look great sleeveless, a more scientific approach is in order.

It’s a kinesiologic fact that certain exercises complement one another, working synergistically to produce optimal results. Others merely overlap, providing little additional utility. Unfortunately, even many seasoned fitness professionals do not fully comprehend this reality and continue to train in a haphazard fashion. This misguided approach is not only extremely inefficient, but it actually compromises results.

To heighten intensity of effort, I recommend performing the exercises in succession, as one giant set. Thus, you’ll perform the Group 1 exercise, followed immediately by the Group 2 exercise and then the Group 3 exercise. Take a short rest (approximately 30 seconds) and repeat the process two more times for a total of three giant sets.

As far as repetitions go, choose a rep range that’s consistent your goals. Consider the following:

High Reps: If you want to improve the “tone” of a muscle without substantially increasing its bulk, it’s best to train in a high rep range employing between 15 to 20 reps per set. High reps target your slow-twitch muscle fibers (also called Type I fibers). These fibers are predominantly utilized during continuous activities sustained for long periods of time. Because of their endurance-oriented nature, slow-twitch fibers have only a limited ability to increase in size. Thus, by targeting these fibers, you’ll attain a lean, toned physique while tempering gains in muscular mass.

Moderate Reps: If you want to maximally increase the size of a muscle, the use of moderate reps is warranted. This entails training with “heavy” weights, using between six and 10 reps per set. The goal here is to stimulate your fast-twitch muscle fibers – the ones that have the greatest potential for growth. These fibers (also called Type II fibers) are activated during intense, short-term activities. They are strength-oriented and therefore expand in size in order to accommodate the demands of heavy lifting. As a rule, they’re the only fibers that have the ability to promote muscular bulk.

Regardless of what rep range you choose to employ, make sure to apply the principle of progressive overload. Your body is a very adaptive organism and strives to maintain a stable environment (called homeostasis). The only way to overcome homeostasis and promote muscular development is by taxing your muscles beyond their present capacity. Accordingly, choose a weight that causes you to struggle on the last few reps. If you can easily complete the set without much effort, the weight is too light!

OK, now that you’re armed (no pun intended!) with the basics of the routine, let’s discuss the specifics for each muscle complex. 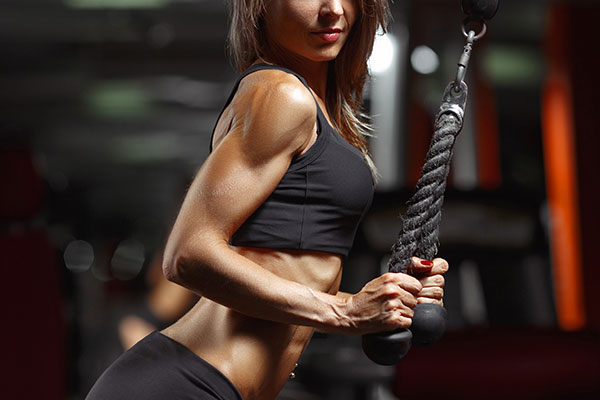 The shoulders (i.e., deltoids) delineate the contour of your entire body. Not only are they aesthetically pleasing in their own right but, when properly developed, they help create the illusion of a smaller waist. That’s why fashion designers frequently insert shoulder pads into their garments. But, the problem is, you can’t hide poor shoulder development when you go sleeveless; there are no shoulder pads in a tankini. Only by training with a multi-angled approach can you get your delts into shoulder-baring shape.

Group 1 exercises focus on overall shoulder development, with an emphasis on the anterior (frontal) deltoid. This is accomplished by performing various types of shoulder presses. During pressing movements, the anterior delt is the primary muscle mover, with supplemental involvement from the medial and, to a lesser extent, posterior, heads. In addition, the trapezius, clavicular (upper) portion of the pectorals, triceps and many other stabilizer muscles, also are active to varying degrees.

Group 2 exercises target the medial (middle) head of the deltoid. This is accomplished by performing movements that employ shoulder joint abduction (bringing your upper arm out to the side and away from the midline of your body, such as with variations of the lateral raise and upright row). From an aesthetic standpoint, the medial delt is the most important of all the shoulder muscles. It is responsible for promoting shoulder width and, when properly developed, creates the illusion of a smaller waist.

Group 3 exercises target the posterior (rear) head of the deltoid. This is accomplished by performing movements that employ horizontal extension of the shoulder joint (bringing your arm across and toward the back of your body). These maneuvers also work the infraspinatus and teres minor – two of the four “rotator cuff” muscles. Since the rotator cuff muscles are extremely important in stabilizing the shoulder joint, significant improvements in functional ability can be achieved.

I’ve yet to meet a woman who doesn’t covet a firm, pert chest. However, since breast tissue is predominantly comprised of fat, it succumbs to the effects of gravity and gradually begins to sag over time. Pregnancy can further exacerbate this condition. Fortunately, a well-designed training routine can help to offset the ravages of time and restore your chest to its previous glory. Targeted body sculpting will help to lift and define your chest, giving the area a fuller, shapelier appearance.

Group 1 exercises target the upper (clavicular) pectoral region. This is accomplished by performing compound movements in which the upper pecs directly oppose gravity (such as with variations of the incline press and push-up). Developing this portion of the chest gives a lift to the breasts, helping to counteract the effects of gravity.

Group 2 exercises focus on the lower and middle (sternocostal) pectoral regions. This is accomplished by using compound movements in which the sternocostal portion of the chest is put in a position to directly oppose gravity (such as with variations of the flat press and push-up). Attention to this area helps augment the shape of breasts, creating the illusion of a bigger bust.

Group 3 exercises help isolate the pectoral muscles. This is accomplished by performing single joint movements in which your arms are brought across the midline of your body (a maneuver called horizontal adduction, such as with variations of the crossover and flye). Although other muscles are involved during performance, their contribution is significantly less than in compound movements. Consequently, better pectoral isolation can be attained and the potential for body sculpting is thereby enhanced.

Of all the upper body regions, it’s the triceps that tends to give women the most grief. Like the hips and thighs in the lower body, this area often is a real trouble spot. The quandary here is twofold: Too much body fat and too little muscle. While targeted training won’t strip away the fat (you can’t spot reduce!), it will help to firm up the region. And once body fat is brought down to acceptable levels, the back of your upper arms will be sleek and toned.

Group 1 exercises target the long head of the triceps – the muscle that lies at the bottom-most portion of the upper arm.  This is accomplished by keeping your shoulder flexed (i.e., your arm is raised and your elbow points toward the ceiling) throughout each move. The long head is extremely important from an aesthetic standpoint. If it lacks tone, you end up with drooping arms that seemingly flap in the wind when held out to the sides (the “bat wing” syndrome).

Group 2 exercises emphasize the medial and lateral heads of the triceps. This is accomplished by performing movements in which your arms are extended at your sides. When the upper arms are slightly hyperextended (brought behind the torso, such as with variations of the pressdown and kickback), the effect is even more pronounced and even better isolation is achieved. Both the lateral and medial heads combine to delineate the middle region of the upper arm, helping to form the distinctive “horseshoe” appearance of the triceps. The lateral head, in particular, creates the “tail” of the horseshoe. When properly developed, this gives the triceps a polished look that is a sure sign your arms are in peak condition.

Group 3 exercises stress all heads of the triceps in roughly equal fashion. This is accomplished by performing movements in which the upper arm is in a “mid-position,” held out at a 90-degree angle to the torso (as in variations of the nosebreaker). These exercises are great overall triceps builders, adding density to the muscle complex.

The biceps are the ultimate symbol of strength; no other part of the body is as glorified. After all, when someone asks you to make a muscle, it’s the biceps that you flex, not the chest or thighs. But, if this is one of your weak spots, don’t fret: The biceps is relatively quick to respond to exercise. It’s one of the first places you’ll notice results from your training efforts. The reason is simple: There just isn’t much fat to obscure it from view. While the triceps region tends to be an adipose (fat) storehouse, the area around the biceps is usually quite lean. Consequently, even a small improvement in muscular development really makes the biceps stand out.

Group 1 exercises target the long head of the biceps. This is accomplished by performing movements in which the upper arm is held at the sides or slightly behind the body (shoulder joint extension/hyperextension, as with variations of the incline, barbell and drag curls). The long head resides on the top, outer aspect of the upper arm. It has a lengthy tendon, so the diameter of its muscle belly is not as great as in the short head. However, because of its anatomical position, it’s normally associated with the biceps “peak.” Thus, increased development of this head will tend to promote the coveted “mountaintop” appearance of the biceps (although the actual shape of your biceps is genetically predetermined and cannot be altered).

Group 2 exercises target the brachialis. This is accomplished by keeping your hands in a neutral position (palms facing toward the body as with the hammer curl and its variations) throughout the course of movement. These exercises really help provide a polished look to the upper arms, creating delineation between the biceps and triceps.

Group 3 exercises target the short head of the biceps. This is accomplished by performing movements in which the upper arm is kept in front of the body (shoulder joint flexion, as with variations of the preacher and concentration curls). The short head resides on the top, inner aspect of the upper arm. It’s slightly larger in overall diameter than the long head and therefore contributes more toward the girth of the biceps. When fully developed, a split can be seen between the two biceps heads – a true sign of elite conditioning.

What to Know About Quinoa’s Nutrition, Calories, and Benefits