Get Firmer Thighs, Hips and Butt

As women age, one of the unfortunate things that begins to occur slowly, especially after 40 and accelerates in the next decade, is a gradual loss of muscle. You won’t notice this at first, or even for many years, expect maybe for a few hints. One of those hints includes a slowing of your metabolism, which means it is easier to gain fat on the same caloric intake, and you will find it a little more difficult to lose weight when you are 40 than when you are 20. The thighs and hips can become especially problematic, because this is an area where the buildup of adipose tissue (fat) begins and likes to stay. It’s the loss of muscle, at least in part, as women get older that has been linked to this gradual decrease in metabolic rate and concomitant increase in body fat. But now for the good news (and there is good news)! Most studies suggest that the biological clock can be rolled back about 20 years by consistent exercise. That means a 40-year-old can have the same muscle and heart function of a 20-year-old … or a 60-year-old can look and feel like a 40-year-old. Exercise is not a miracle worker, but it can come pretty close.

If your goal is to regain the lower body structure and firmness that you had when you were younger, you will need to regain a bit of the muscle that age has (and will) unknowingly robbed from you. Proper exercise will not only create better curves and add muscle firmness, but a little more muscle will increase your metabolic rate, so that you can lose fat more quickly (even when you are not exercising). Of course, the best way to do this is by combining a sensible diet with adequate exercise. If your hips, buttocks and thighs have been particularly lagging behind where you want them to be, dumbbell step-ups will be an excellent way to tighten the muscles, add a little muscle back into your structure and provide a good stimulus to begin a lower body makeover.

Dumbbell step-ups activate the knee extensors of the thigh, the powerful hip extensors (hamstrings and gluteal muscles) and the calf muscles. This means that you get a great overall lower body workout by using a rather simple exercise. However, simple does not mean easy, especially when you add some load to the movement by holding on to a pair of dumbbells for added resistance. Nevertheless, this added load is a necessary key to maximally activating the lower body muscular and achieving your goals in the shortest possible time.

The quadriceps femoris (“quadriceps”) of the anterior thigh consists of four muscles: three vastus and the rectus femoris muscles. The vastus muscles are named based on their position on the thigh. The vastus lateralis muscle lies on the lateral (outer) part of the thigh. The vastus medialis covers the medial (inner) part of the thigh. The vastus intermedius is located between the vastus lateralis and the vastus medialis and it covers the central and deeper parts of the thigh. As you might expect, the vastus medialis, intermedius and lateralis muscles attach to the medial, intermediate and lateral parts of the femur, respectively. The fourth muscle in this group, the rectus femoris, attaches to the hip and it courses down the central portion of the thigh. All four muscles come together above the knee to attach to the patellar tendon, which attaches to the patella (kneecap). The patellar ligament connects the patella to the top part of the tibia bone of the leg just below the knee. Together, the quadriceps femoris extend (straighten) the leg at the knee joint by pulling on the patella and through it, the patellar ligament that is attached to the lower leg (tibia bone). The rectus femoris also flexes the thigh at the hip joint by pulling the knee and thigh toward the chest. In the stair climb, the four quadriceps muscles help to extend the knee during each step upward.

The gluteus maximus is the largest hip extensor muscle. It is most active during the push phase of the stair climb upward, because it helps to straighten (extend) the hip joint by pulling the thigh posteriorly. The fibers of this muscle run from the posterior side of the ilium bone of the hip and sacrum bone of the lower region of the vertebral column, to the posterior part of the femur and the iliotibial track (a tough band of tissue that runs along the lateral part of the thigh and attaches to the lateral side of the tibia bone near the knee).

The hamstring muscles include the semitendinosus, the semimembranosus and the hamstring part of the biceps femoris muscles (note the biceps femoris also has a short head which does not cross the knee joint). Part of a fourth muscle, the hamstring portion of the adductor magnus also crosses the hip and assists in hip extension. The hamstring muscles have two common features. In general, these muscles attach to the hipbone structure posteriorly and run to either cross the knee joint (semimembranosus or semitendinosus, biceps femoris) or attach to the femur bone (adductor magnus). These muscles help the gluteus maximus to extend the hip during each stair that is climbed and they are active to reposition the leg for the following step. The gastrocnemius muscle of the calf is physiologically and anatomically two distinct muscles, each with slightly different fiber types and functional properties.

When you first start step-ups, they can be done with only your bodyweight, but shortly you should be adding extra weight. When you are ready to advance, select a 2-pound dumbbell for each hand. I know this will seem light, but after starting the exercise, you won’t be able to wait to put them down! You should gradually strive for heavier weights as your muscles adapt and get stronger and firmer.

1. In case it is not obvious, you should make sure that the shoes you are wearing have a good gripping sole for the step-ups. You should also always warm up your knees thoroughly before doing any direct exercise, and this is especially important for dumbbell step-ups. A few minutes of stretching and some stationary cycling are well worth the investment in protecting and warming up your delicate knee joints.

2. Locate a step or a sturdy and steady box and if possible place it in front of a mirror so that you can monitor your movements. Most gyms will have a step with a nonslip surface to use. Bring two 2- or 3-pound dumbbells to the bottom of the step. Grip the dumbbells and stand upright. Let your arms hang straight down from your shoulders. 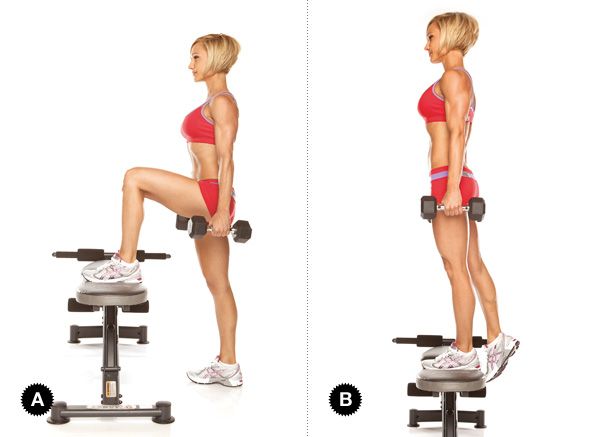 3. Take your first step upward to the top of the step with the right leg. Follow this by stepping up with the left. Keep your head up (don’t look down at your feet) and watch yourself in the mirror if possible.

4. At the top, do not rest, but step down with the left leg, followed by the right leg.

5. Complete your set with 12 steps for each leg. Rest for about 1 minute, then begin your steps by stepping up with the left leg and also step down with this leg. Do two sets of step-ups; this is fine to start with, but you should work up to four sets.

Don’t forget to alternate your sets with each leg or else one leg (likely your dominant leg) will get a proportionately greater amount of work, which will jeopardize your symmetry. Step-ups will create a balanced lower body so that your hamstrings, gluteals and quadriceps will be firmer, with more shapely muscles. Not only will your muscles be activated, but your entire cardiovascular system will be challenged, and that means more calories expended to increase your goals for reducing body fat. You may not be able to completely stop the aging process, but you can certainly make your legs look younger and shapelier than they have looked in years.

The post Get Firmer Thighs, Hips and Butt first appeared on FitnessRX for Women.

How to love myself | Relationship Advice For Women By Mat Boggs