Q: The upper portions of my thighs have no shape to them. Is there any exercise I can do to get them more developed?

Absolutely. Staple exercises like squats, leg presses and lunges are all good overall thigh developers and should be considered essential in any routine. But in many cases, they aren’t sufficient to bring out truly balanced development of the quadriceps.

To really get to the “upper portion” of the thighs, you need to target the rectus femoris muscle, which provides the main muscular delineation in this region. Unlike the other three muscles of the quadriceps (the vastus muscles: vastus lateralis, vastus medialis and vastus intermedius), the rectus is the only thigh muscle that crosses the hip joint. When the hip is placed in a flexed position (as it often is during most thigh movements), it becomes actively insufficient and therefore is not worked to the same degree as the vastus muscles. Simply stated, this means the vastus muscles will tend to develop more readily than the rectus femoris.

One of the best moves for targeting the rectus femoris is called the sissy squat. During performance of this move, the hip joint remains extended so your torso and thighs remain on the same plane. The end result is that the rectus femoris is forced to work overtime, leading to better upper thigh development. Here’s a description of how to properly execute the move:

Begin by taking a shoulder-width stance. Grasp onto a stationary object (such as an incline bench, an exercise machine, etc.) with one hand and rise up onto your toes. In one motion, slowly slant your torso back, bend your knees and lower your body downward. Thrust your knees forward as you descend and lean back until your torso is almost parallel with the floor. Then, reverse direction and rise upward until you reach the starting position. Once you can easily do 12 to 15 reps, hold a dumbbell against your chest for added resistance. 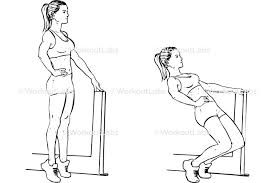 Add this move to your routine and you should begin to see results in short order.

The post Best Exercises for Firm Thighs first appeared on FitnessRX for Women.

9 Drugstore Cleansers That Are Great for Your Skin

These All-Natural Home Remedies Can Help Boost Your Energy

I Need You to Know: Being Trans Means Being Your Own Health Care Advocate

Natural Deodorant Reviews: Which Ones Pass Our Sweat Test?

Shake Up Your Lunch With This Napa Cabbage & Vermicelli Salad