Is Matcha Better for You Than Coffee? What Nutritionists Want You to Know 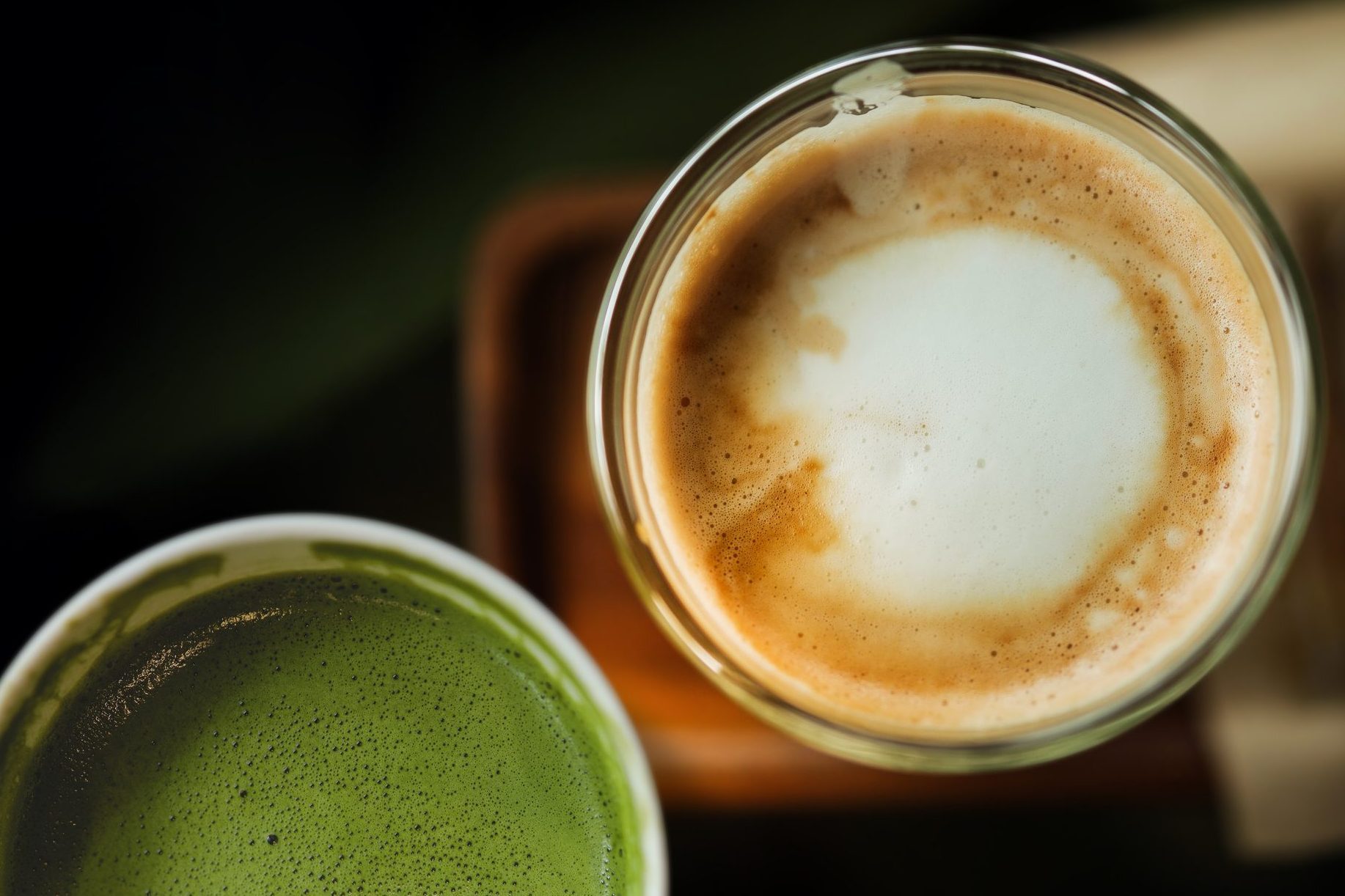 Coffee and matcha both offer quick energy with caffeine and antioxidants, but each boosts the body and brain in different ways.

Matcha may have a long history in Japan, but this ancient green tea has an increasingly bright future around the world. The global matcha tea market was valued at $1.63 billion in 2018, and it’s projected to reach $2.69 billion by 2026, according to global marketing research firm Research and Markets. That’s small beans compared with coffee, which is valued globally at more than $100 billion and keeps growing. But coffee is not for everyone, and awareness of matcha’s potential health benefits seems to be luring away more and more coffee drinkers, many of whom are intrigued by its antioxidants.

There’s also a growing group of people who embrace the drink because it’s stronger than traditional green tea but lighter and less anxiety-inducing than coffee. “I think that people are always interested in finding healthier alternatives to coffee, particularly if coffee doesn’t sit well with them,” says Desiree Nielsen, a registered dietitian based in Vancouver, British Columbia, and author of the plant-based cookbook Eat More Plants. To be fair, coffee offers significant health benefits. But, she says, but matcha can be gentler, its calmer form of alertness working better for some people.

Here is a closer look at both of these popular drinks, including how they’re made, what they contain, and how they can affect the human body.

(Related: Is Olive Leaf Tea The New Matcha? Everything You Need to Know)

Coffee is a ubiquitous stimulant. It’s the go-to energizer for all kinds of people, all over the planet. It’s made from coffee beans, which are actually seeds of flowering plants in the genus Coffea, native to tropical Asia and Africa.

Coffee is now grown in dozens of countries around the world, but Brazil alone accounts for about one-third of global production. Other top coffee-producing countries include Vietnam, Colombia, Indonesia, and Ethiopia. Coffee plants produce fruits (known as “cherries”) that turn red when ripe, at which point they’re harvested and processed. The resulting dry beans can then be ground up to make coffee.

There are many ways to brew coffee—including boiling, steeping, percolating, and pressurizing—all of which can result in remarkably different drinks.

(Related: A Healthy Whipped Coffee Recipe Everyone Will Love)

Like all true teas, matcha begins as leaves and buds on the Camellia sinensis plant, which is native to China. Tea seeds from China were first introduced to Japan in the eighth century, and the concept of matcha followed a few hundred years later, reportedly brought back from China by the Buddhist monk Eisai. Once established in Japan, matcha took on a life of its own, becoming a key ingredient in the country’s tea culture.

There are a few key differences between matcha and green tea, including how they’re grown, processed, and brewed. Matcha plants are grown under partial shade for a few weeks prior to harvest, which triggers the leaves to produce more chlorophyll as an adaptation to less sunlight. This extra chlorophyll results in leaves that are darker green, more flavourful, and more packed with certain nutrients. These leaves are harvested by hand early in the growing season, then carefully processed and ground into a fine, bright green powder.

Unlike a typical tea infusion—in which tea leaves are steeped in hot water but removed before drinking—matcha powder is typically mixed into water to create a suspension, which is then consumed in its entirety. Many people drink it just like that, nothing else added. Others combine it with milk and sweetener for a matcha latte.

(Try: A Matcha Smoothie Recipe This Dietitian Makes on Repeat)

Matcha may be generating more buzz these days, but while its potential health benefits are impressive (more on that later), they shouldn’t detract from the comparable perks coffee can offer. Since coffee is often a daily habit, it’s an important dietary source of antioxidants for many people, according to a study published in the journal Antioxidants. Research suggests drinking coffee is associated with a lower risk of type 2 diabetes, liver disease, Parkinson’s disease, and death from various causes.

Drinking coffee “seems generally safe within usual levels of intake,” a BMJ research review found in 2017, and at three to four cups per day, it’s more likely beneficial than harmful. More research is still needed to reveal whether coffee really causes all of its associated health benefits, the review authors noted. An eight-ounce cup of coffee typically has 80 to 100 milligrams of caffeine, or 40 milligrams per 100 milligrams of coffee.

Caffeine has been linked to improved mood and cognitive function, but it’s also associated with anxiety, and high doses can worsen anxiety and sleep disorders, according to a 2018 study published in Advances in Psychiatric Treatment. Drinking coffee can also promote acid reflux, and as Nielsen points out, many people drink their coffee with less beneficial additives. “Coffee is actually a healthy beverage on its own,” Nielsen says. The key: on its own. “We also drink coffee in the form of heavily sweetened coffee drinks, packed with cream and sugar, which is not the best for us.”

So, yes, a black coffee will do you good. Coffee loaded with cream, sugar, whipped cream, and a drizzle of chocolate? Not so much.

(Related: The Different Types of Coffee—From Healthiest to Least Healthy)

Green tea has been linked to lower risk of several diseases in animal studies, but research in humans has often yielded inconsistent results, according to the U.S. National Center for Complementary and Integrative Health. Nonetheless, green tea has been used medicinally for millennia, and there is mounting evidence to support at least some of its reputed benefits. Green tea is rich in plant micronutrients known as polyphenols, including a group of antioxidants called catechins.

Evidence suggests daily tea drinking—plus a “healthy habitual dietary pattern”—may be associated with a lower risk of heart disease and all-cause mortality in adults, researchers reported in a 2020 research review in Advances in Nutrition. The major polyphenol in green tea, epigallocatechin-3-gallate (EGCG), has been linked to anti-diabetes, anti-inflammatory, and antioxidant effects, according to a 2018 research review in the Journal of Ethnopharmacology. It’s also is associated with preventing or breaking up atherosclerosis, a buildup of fats in the artery walls. Green tea also contains L-theanine, an amino acid that can help reduce stress and anxiety.

While matcha is a type of green tea, the way it’s grown and prepared gives it a big nutrition boost over other green teas. Not only is matcha made from shade-grown leaves with more chlorophyll, but we ingest much more of those leaves than we do with steeped tea. “You are grinding and consuming the whole leaf as opposed to steeping and throwing the leaves away, so you are going to consume more of the naturally occurring phytochemicals in matcha,” Nielsen explains. The level of EGCG is 137 times higher in matcha than in China Green Tea Tips green tea, according to a widely cited study in the Journal of Chromatography A, and it’s at least three times higher than in other green teas.

Matcha vs. coffee: Which is better?

Matcha and coffee are both potentially beneficial drinks, offering alertness along with valuable antioxidants. Your choice between the two may come down to how coffee makes you feel. If you have anxiety or acid reflux, you may need to skip the coffee altogether. Green tea can be a good alternative. And then there’s the matter of caffeine. “Depending on how sensitive an individual is to caffeine, green tea or matcha might offer a less jittery alternative,” Nielsen says.

It’s a nice middle ground between the caffeine levels of coffee and steeped green tea, and it might feel less intense than coffee, even if its caffeine content isn’t much lower. “The presence of an amino acid called L-theanine in green tea and matcha may be even more important, as it moderates the effect of caffeine on the nervous system,” she says.

Growing in the shade helps preserve L-theanine in tea leaves, Nielsen says, so matcha may contain even more L-theanine than other green teas, possibly helping soften the effects of its extra caffeine. “For some folks, though, any caffeine will contribute to the jitters,” she says. “So people have to experiment and see where their unique tolerance lies.”

On the other hand, if you have no issues handling coffee or caffeine, you don’t necessarily have to choose sides. Go ahead and drink coffee sometimes and matcha other times. Or to just pick a favorite based on taste rather than trying to weigh health benefits.

(Related: Is French Press Coffee Bad for You?)

Nielsen points to one thing that can sabotage the benefits of both coffee and tea: your sweet tooth. No matter how healthful those coffee beans and tea leaves are, they won’t cancel out heaps of sugar, heavy cream, or dessert-worthy add-ons like chocolate, caramel syrup, or whipped cream.

“Drink the one you enjoy most, as long as it doesn’t cause any troublesome side effects like GI upset or the jitters,” she says. “Buy the best quality you can afford in hopes of maximizing phytochemicals, and if you can, drink it straight up or, at the very least, with a minimum of added sugar.”

Next: Is Stevia Bad for You? Here’s What Experts Say About This Sugar Substitute

Is Barley Good for You? What Nutritionists Need You to Know