Ask any person who has lost significant amounts of weight and he/she will tell you the weight comes off slower after the first 10 pounds or so. The initial weight loss is usually rapid and energy levels remain fairly high, but then it becomes more difficult to lose additional weight. Part of the reason for this common observation is a survival mechanism that kicks in when calories are restricted below maintenance levels to mimic a period of starvation. This process is termed “adaptive thermogenesis” in scientific circles and basically describes a process whereby calories are burned at a slower rate after a period of weight loss, making further weight loss more difficult.1-4

It is hard to understand why this should happen in today’s society, when easy access to food and minimal work/labor requirements make obesity one of the major health care issues. Yet, consider just a few generations ago, even as recently as the Great Depression of the 1930s, which many of our distant relatives somehow survived, when food was scarce and labor-saving devices did not exist. Beyond those times, think of even harsher environments such as the trials of the pilgrims, the Great Potato famine in Ireland, the Dark Ages before the Renaissance, going all the way back to primitive man in his cave. Our bodies are genetically designed to store and preserve energy stores rather than wastefully burn calories when a spare tire develops around the midsection.5 The ability to gain fat has likely been genetically selected into our DNA code, as lean individuals who could not lower a fast metabolism during a famine probably died when the winter months came along or disease killed off animal herds.

Thus, the need for adaptive thermogenesis has always been present (at least until the invention of fast food restaurants). Despite the value this biological response has in times of famine, it’s one of the main causes of failure for many dieters. Dieting is not a gratifying experience in the short term, so when the struggle and effort does not result in a tangible reward, many dieters lose motivation and give up. The shame of this emotional surrender is that time is on the dieter’s side, if he/she continues to stick to a mildly hypocaloric (500 calories/day under maintenance) diet with 30 minutes of structured activity.

Exactly why and how this metabolic slowdown occurs remains something of a mystery, but has been the subject of many studies. There are accepted observations, such as decreased thyroid hormone output and T4 to T3 (thyroid hormone) conversion, lower uncoupling rate in mitochondria, decreased activity, etc.1,6 There are also hypotheses that are more controversial, but intriguing when supporting data is presented.

One such topic that is certain to be viewed as controversial is the subject of a study published in the International Journal of Obesity.7 The investigative team of Tremblay et al. reviewed the data of a weight loss protocol including 15 subjects. Most of these subjects (11) received fenfluramine to aid in weight loss, the remainder losing weight without pharmaceutical assistance. Prior to entering the weight loss program, blood samples were drawn and measured for levels of leptin (a hormone released by fat cells that is involved in regulating the metabolism), T3 and free T4, and a variety of chemicals.

The chemicals of interest are related compounds generically called organochlorines (OC). OC pollutants are present in industrial and agricultural waste.8,9 OC pollutants collect in fat cells in trace amounts, slowly leaching out into the bloodstream.10 Most people living in developed countries are exposed to these pollutants and harm may arise if the exposure is too great. Controlling the sources of pollution and the health of the American public is the responsibility of the Environmental Protection Agency.

After establishing the increase in blood levels of OC pollutants, the investigators analyzed any potential relationship between the noted observations and the change in metabolic rate experienced by the dieters. 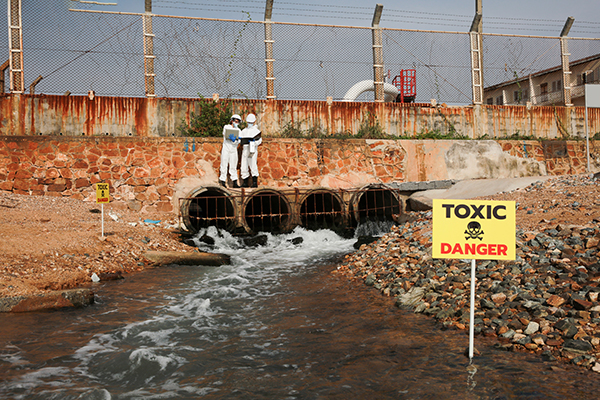 Tremblay et al. considered the exaggerated drop in metabolic rate consistent with adaptive thermogenesis and attempted to explain the effect based upon an analysis of the data. Using a statistical model, the group determined that the majority of the difference between actual and expected metabolic rate was due to two primary factors.

The lesser of the two is an expected culprit, already confirmed in numerous other studies. Leptin is a hormone produced and released by fat cells.12 When stored fat is high, leptin levels in the blood are high, triggering a series of reactions leading to an elevated metabolic rate. Much of this effect takes place within the brain, including the highly important hypothalamic-pituitary axis. This region of the brain is responsible for regulating many of the body’s hormones, including thyroid hormone. Surprisingly, the reduced leptin did not appear to affect levels of free T4 or total T3.

The primary cause of the exaggerated decrease in metabolic rate, according to the statistical model used, was the elevated blood OC pollutants levels.7 Presumably, as the stored fat levels decreased, an increased amount of OC pollutants were released into the blood. The OC pollutants, acting as metabolic toxins, are believed by the authors of this paper to have played a key role in the detrimental (relative to weight loss) effect of adaptive thermogenesis.

The authors supported this contention by referring to published studies demonstrating an association between increased levels of OC pollutants due to weight loss, and lower T3, metabolic rate and skeletal muscle oxidative ability (fat burning), as well as mitochondrial function.13-18 Thus, they concluded that some degree, possibly the majority, of adaptive thermogenesis that occurs during weight loss is due to a poisoning effect of the pollutants as they are released in higher concentration from the dwindling fat stores.

This study and its conclusion are very interesting because they shed light on another possible factor that may be involved with the rapidly growing rate of overweight and obese individuals in the United States and other developed countries. However, it will be some time before this hypothesis will be accepted as scientific fact. This paper has already garnered some criticism. The authors rely heavily upon many of their own previous publications to support their conclusion. The evidence for a causative relationship between OC pollutants and adaptive thermogenesis is inadequate, as opposed to an association. It’s similar to saying that ice cream cone sales are related to drowning, when in fact, they both go up in the summer in association with warmer weather. Rudolph Leibel, an obesity geneticist at Columbia University, countered the argument for OC pollutant-induced adaptive thermogenesis. He notes in a quote appearing in Science News, “The wiring for the defense of body fat has been around a lot longer than pesticides.”19

The Body of Evidence

Even in the complete absence of OC pollutants, dieters experience adaptive thermogenesis during prolonged weight loss, purely as a genetically encoded biological response to an environmental stress. This is a survival mechanism that allowed our ancestors to survive droughts, plagues and other periods of famine. Is it possible OC pollutants, present in many commercial pesticides, may augment by a matter of degree the change in the metabolic rate? That is certainly a possibility. At this time, it’s impossible to say whether the increase in blood OC pollutants is just a reflection of the fat release that occurs during weight loss, or if it is a factor with potentially toxic effects on the metabolism. It’s an area worthy of further investigation. Hopefully, other researchers will add to the body of evidence already presented. If a causative relationship is found, it will certainly become an issue with many clinical, as well as political, challenges.

9 Tricks to Make Your Diet a Little More Mediterranean

Get a Complete Arm Workout

15 Winter Meals to Enjoy on Cozy Nights In

The truth about women's health and beauty| Go to https://www.summer-n-sand.com/